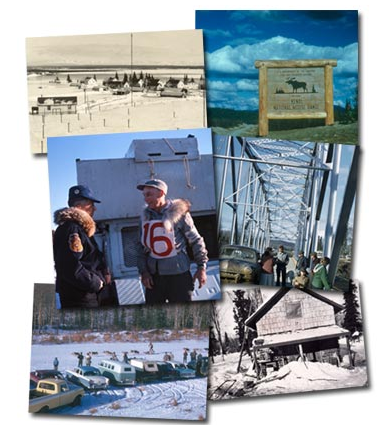 Use Agreement and Restrictions
All of the photographs in this collection are for personal, educational, or research use only. These images cannot be used for political, commercial, or advertising purposes.

At the present time the college does not have the capabilities to reproduce prints from the image scans.

I agree (Enter the site)

The purpose of the Central Kenai Peninsula Photo Collection is make available to the general public, educators, and researchers images which document the emergence of the communities of Soldotna, Kenai, Nikiski, Sterling, Ninilchik, Kasilof, and Clam Gulch, Alaska during the mid to late 20th century. Many of the images will prove nostalgic to long-term residents, taking them back to an earlier time. But nostalgia is not the sole purpose of this collection. Through the photo record residents and others can understand the trajectory of change that led to the current state of affairs. Roads, schools, churches, were built, businesses were started, clubs, organizations, and polities were formed, and what emerged were the Alaskan towns of today. Behind the infrastructure and organizations are decisions people made either individually, as families, or in groups. Some were good decisions, some not so good, and some bad. One way or another, we are the collective of the decisions made in the recent history of this part of Alaska.

History of the Project

This collection of photographs began in 1998 when Sterling homesteader Virgil Dahler passed away and a relative donated his photographs to Marge Mullen. Mullen enlisted the help of Jean Brockel and together they examined the photographs which proved to be a rich portrayal of the Soldotna area in the 1950s, 60s, and 70s. As Mullen and Brockel worked in the Anthropology Lab at Kenai Peninsula College, it became apparent that the present time would be a critical window to create a collection of Kenai Peninsula photographs focusing on the mid-twentieth century while individuals who could identify people, places, and events were still alive. Many photo collections have already been lost because heirs have neither the knowledge nor the inclination to archive the photographs and they are often disposed of or dispersed. Other collections were solicited such as those of Celeste Egan, Dick Mumsen, and Marge Mullen herself. When some of the photo files of the defunct Cheechako News became available and the project that became this on-line photo archive was born.

The photos were archived placing them in acid-free envelopes, giving each an accession number. The originals are now stored in a fireproof cabinet in an archival room at the Anthropology Lab at Kenai Peninsula College with additional protection from the college’s fire-suppressant system.

Alan Boraas developed a database that included information such as who was in the picture, where it was taken, what type of image it was (slide, Polaroid, black and white print, etc.) and other pertinent information. Relying on her vast memory, Marge Mullen entered almost all the information into the database frequently consulting with others of her generation to identify a building or a name from fifty years ago.

The collection quickly grew to over 1000 photos and another component of the project was added to digitize the photographs. Marge Mullen scanned all of the photos into digital files which are stored and backed up on Anthropology Lab computers. Not only was this a form of photo backup should something happen to the originals, but it opened the possibility of creating a searchable Internet database.

In 2009 and 2010, Clark Fair edited the database correcting the inevitable accessioning errors that occur in so complicated a project and added information to some of the descriptions. Fair and Boraas also scanned additional photographs and created descriptive entries. Kenai Peninsula College student assistant Kluane Pootjes aided in this work.

In 2010, Kenai Peninsula College installed software that made the online publication of the Central Kenai Peninsula Photograph Collection as a searchable database possible. Jesse Glaves developed the website and the database and digital photo scans were imported into the website.

The intent of the collection is to provide residents and non-residents free, searchable access to the photos and descriptions for personal, educational, and research purposes (see use restrictions to the left).

If you detect an error in a photo description, or other information, contact KPC Advancement. Please identify the photo accession number and give as detailed a correction as possible. Where there is conflicting information, Boraas reserves the right to determine the accuracy

If you object to a photograph of yourself on this website contact KPC Advancement. Identify the photo accession number (KPC-PC-xxx) with your request.

Use Agreement and Restrictions

All of the photographs in this collection are for personal, educational, or research use only. These images cannot be used for political, commercial, or advertising purposes. At the present time the college does not have the capabilities to reproduce prints from the image scans. For technical inquiries, or to report errors, please contact webmaster@alaska.edu.